+ This game has a pretty unique grid based battle system, and it’s pretty enjoyable.
+ Endgame combat has some really big highs, like 10 turns in a row with turn break and crazy damage multipliers from Rosch’s 7 hit/Gafka’s 9 hit combo. I had a lot of fun with this system, the highs are super high but the lows are pretty low too. Stacking enemies with positionals is pretty fun though.
+ Character usability is great in this game, every character has a niche they perform, and even Stocke doesn’t have the most amazing MC privilege like some MCs do, but he is still very strong.
– Party experience isn’t quite split evenly which always bothers me.
– It doesn’t teach you the system or what combos do very efficiently, and fighting mobs without AoE/speed/all positionals at the start of the game is kinda not good (Sand Fortress). + Nice sprites all with distinct animations. It’s funny how Raynie and Marco use similar animations to regular mercs, but I guess they are regular mercs but a bit stronger. Stocke’s sword flashing and Eruca’s gun animations standout quite well.
= Pretty regular portrait art and map design. 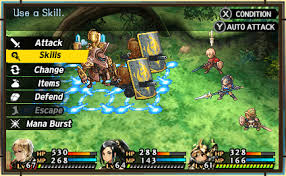 + Honestly? I had such a good time with the writing and characters in this game. Time travel plots are really enjoyable to me if done well, and this wasn’t any exception.
+ The characters are all written very well and aren’t one dimensional and have their own lives apart from the MC, including NPCs. They all have their own reasons for doing the things they do, and I found that pretty refreshing.
+ There was always something interesting keeping me in the story, even if one timeline was boring at a time, the other one was interesting during that timespan, and the ending is easily one of the best I’ve seen to a JRPG.

– I’m a little iffy on the stuff they added in the Perfect Chronology version… especially the extra ending.. (Hugo? Protea? ????) but it is more content, I just don’t know if it’s actually good content.
+ The base game has a plethora of content, and some of the sidequests contribute to a true ending which is nice, they don’t feel just like fetch quests. Everything you do feels rewarding.
+ Each character has a sidequest that nets them more abilities which is nice, no character is valued over the other.

= A lot of music that is just befitting to the area that isn’t too memorable.
+ That being said, Shimomura did make some bangers this game, notably Mechanical Kingdom, Blue Radiance, The Edge of Green, and The Garden Where the Celestite Lies.

– Master Vainqueur has to be one of the worst optional boss fights I’ve ever played.. please don’t have optional bosses you do 1 damage to even at endgame.
– I find it interesting how they updated the portrait art from the original DS game..
– I didn’t actually learn combos increased combo damage significantly until the final chapter lmao.
– I wanted to fight Dias and Selvan so badly..
– Stocke, Rosch, and Raul are the boys. I love Rosch’s relationship dynamic with Sonja. I really appreciate Raul’s cynicism, he’s the sort of character I can really appreciate since it’s not easy to notice what you’re doing wrong is actually wrong in the moment and regress.
– Really enjoyed the atmosphere in this game, some games that include war don’t feel like there are actual battles taking place, but this game has good pacing.
– Funny how Raynie and Marco have the same VA as Io and Daichi from Devil Survivor 2, I got deja-vu right away since I came off of that.