+ This game is considered the blueprint for future Tales of games, sporting free run and the HP/TP system. AI isn’t too challenging with free run though, and the game does just have better artes for certain characters (Void Tempest, Rending Thrust, etc).
+ Boss battles were fun, especially the six God Generals, All 6 characters were pretty fun to play at times as well.
– Higher difficulties can be statchecky at times, see Unknown mode Liger Queen. 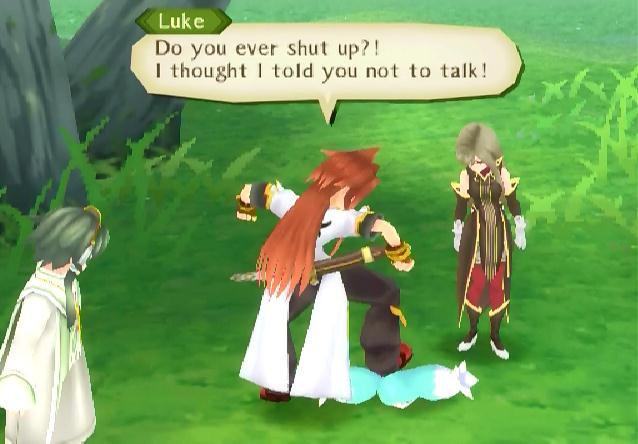 – Bad framerate makes things look choppy.
+ Some artes/FOFs are pretty cool looking, but overall leave a lot to be expired. Jade’s spells are a highlight.
– Models and animations outside of battle seem choppy or slow.
+ General art assets are fine.

+ I really enjoyed all the characters in this game, they all have their own motivations for what they do, including the antagonists.
+ Sidequests bolster the amount of lore and backstory between characters like Tear and Legretta, or even minor characters.
+ The world is pretty well built, Auldrant has some really neat lore behind it.
+ I really think life being bound to prophecy and religion was an interesting concept and it was executed well in this game. It was really interesting how the characters fell into the prophecy and the decisions they took regarding their own destinies.

= There is always a lot to do in the story, although it doesn’t always feel fulfilling.
+ A lot of sidequests that are meaningful. Jewel of Gardios, Cecile/Frings, and various costumes are nice to have. I like how every playable character has their own artes sidequest line as well.
– Lots of backtracking.

= Standard Motoi Sakuraba fare of music. Some really boring music like the Baticul sewers but some pretty good music at times. Motoo Fujiwara’s contributions to the game are very enjoyable though.
+ Standouts include mirrors, finish the promise, abyss.

+ FOF circles were the gimmick in this game, they actually make the game way more enjoyable in combat. (+1)
+ Multiplayer was good in this game, the camera zooms out further the more players you have. Doing the Arena Team Exhibition Battle with my sister was really a highlight of my younger years. (+1)

– Loading times are pretty bad.
– I love this game despite the lower score, I played it a ton with my sister and I have a lot of nostalgia for this game, but replaying it kinda let me see it’s flaws as well. It’s really fun to play with someone.
– Sunlight Chamber on Guy is super fun.
– I like Jade, Guy, and Tear a lot.

Tales of the Abyss